In a very interesting conversation with a trainer whose observations are consistently brilliant, I realized that it’s hard for riders to see the similarities between human and horse gaits.  This is because the vertical position of a human’s torso, due to our being bipedal, changes the orientation of the arms or forelimbs, thereby obscuring their motion.  So I thought it might be useful and interesting to compare the motions of humans and horses, anatomically. 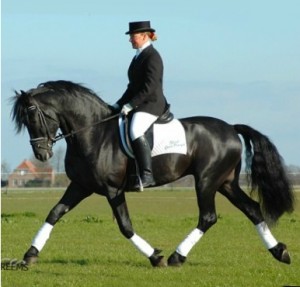 First, here is a horse in a trot.  If you ride, you are familiar with this gait in which the legs on one side of the body either come together beneath the midline at the same time or extend away from the midline at the same time.  In this case, the left fore limb is pulled behind its neutral position, and the left hind limb is moved forward or ahead of its neutral position. The neutral position of the uppermost limb bones is important to understand in this case.  So let’s look at a horse skeleton very quickly, to see what’s happening to make the limbs look this way. 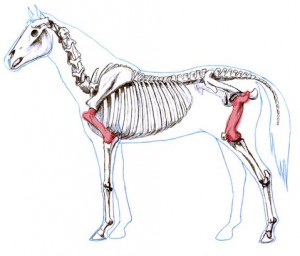 In this horse skeleton, the animal is simply standing, not moving.  So the limbs are said to be in a neutral position because the horse isn’t going anywhere right now.  I have colored two bones red.  The one in the fore limb is called the humerus.  It articulates with the scapula at the top — and you know the scapula because it underlies the withers.  At the bottom, the humerus forms part of the horse’s elbow, just in front of where you put the cinch or girth.  Most of the humerus bone is not easy to see when you look at a horse, because it is so closely bound into the chest that we just don’t notice it.  But it’s there, and you can see its approximate position marked by a red line in the diagram of the trotting horse, below, that I have modified to show you where these crucial bones are. 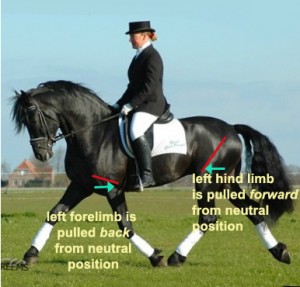 I have also drawn a little turquoise arrow to show you the direction the humerus has moved (from the neutral position) to get to where you see it, in this photo of the trotting horse.  You may wonder, “If that’s where it is when it’s pulled backwards, how far forward does it go?”  You can tell by looking closely at the front of the horse in the picture.  You can see where its left elbow is;  now look at its right forelimb and imagine about where the right elbow is.  That elbow is a lot farther forward, and it’s because the humerus of the right leg is oriented about as far forward of its neutral position as it can get.  Horse humerus bones are not able to reach out as far as human humerus bones can.  But they do move, and you can see how much by comparing the positions of the two elbows on this horse.

Now let’s look at the back leg, comparing it to the skeleton above just as we did with the front leg.  Remember there is a bone colored red on the back leg as well, and that’s the femur.  I have marked the position of the femur with a red line in the trotting horse diagram, too, and also put in a small turquoise arrow to show you the direction it has moved (from the neutral or standing position) to get to where it is now.  If you look at the skeleton one more time, with the legs straight down as the horse is simply standing, you can see that the fore limb has moved behind that position, and the hind limb has moved ahead of that position.

So take a moment to familiarize yourself with the positions of the horse’s upper limb bones in a trot, and then let’s look at a human being jogging. 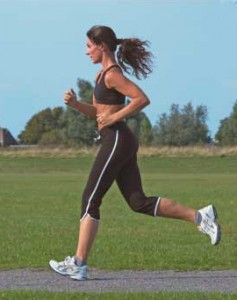 Here is a photograph of a jogging human being.  To many people, this does not look like the trot in the horse that we just saw.  But that’s only because your eye is tricked by the human’s vertical torso.  Imagine the person standing in a neutral position, not going anywhere.  The legs would be straight under the body, and the arms would be hanging straight down.  Now look at the left arm and leg, facing the camera.  Where is the left arm, with respect to the neutral position?  It’s behind it.  It has been drawn backwards.  And where is the left leg, with respect to the neutral position?  It is in front of it. It has been drawn forwards.  Does this remind you of anything we just saw? 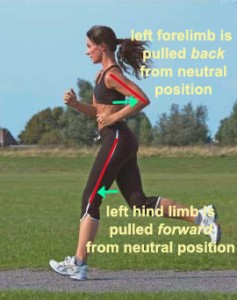 Here is the same image, drawn and labeled as I did the trotting horse.  Compare the two labeled images, particularly the motion arrows of the humerus and femur bones in the human and the horse.  This still might look to you like it’s not the same thing, in which case it might help to turn the woman in the picture so that her torso is level, like the horse’s torso is, and then put her arms and legs back in place.  I cut the picture up and put it back together to help you see what this might look like, and it’s below — with my apologies for the rather Frankenstein’s monster effect of the cutting-and-pasting! 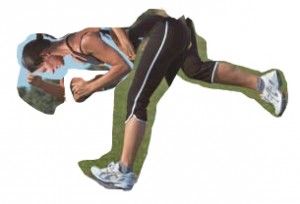 Her right arm, away from the camera, looks a bit disconnected here because of course it would be more visible if she wasn’t standing upright.  (When she is upright, her right humerus is partially hidden by her chest.)  But pay particular attention here to her left arm and her left leg.  The humerus of her left arm is drawn back, and the femur of her left leg is forward.  This is exactly the positions we see in the left limbs of the trotting horse in the first picture I posted on this blog.  And that is no coincidence.

Humans “trot” when they jog or run.  This is not metaphor, but actual homology.  Homology is an anatomical term meaning that something is similar because of an underlying commonality.  In this case, there are structures that are the same in both horses and humans — the humerus bone and the femur bone, for instance.  (Both articulate to the same bones at both ends, in both animals, and both are derived from the same types of embryonic tissues.)  The muscles are largely the same as well, and these are the muscles that move the humerus backwards and forwards, or move the femur backwards and forwards.  But, even more importantly when it comes to discussion of gaits, there are neurological commonalities as well.

Muscles contract to move bones when they are stimulated by nerve impulses sent by the brain.  Different patterns of limb movement that are highly stylized and predictable — like the trot — are created by very specific patterns of nerve firings on both sides of the front and hind limbs.  These firings must be coordinated very precisely for the animal to move properly without losing its balance.  For instance, simply to move the humerus backwards requires that a number of muscles fire in a very specific sequence and also that a number of arm muscles do not fire at all!  When you think about this having to happen on all four limbs simultaneously, you can begin to get an idea of the complexity and precision of neural firing patterns that generate movement in a certain gait.  Neural firing patterns — the actual placement of the nerves as well as the systems that regulate the patterns of firing in the brain — are very conservative, meaning they are much more similar between different animals than we might think they would be.  So even though a horse and a human look very different to our eyes, they both have a humerus bone and a femur bone — and the pattern of neural firing that produces a trot is not just similar, it’s nearly identical!

In my next post, I will talk about the walking gait in horses and humans.

(Note:  If you wonder why the woman’s lower forearm and hand are drawn up so close to her body rather than being extended on back and down as in the horse, it’s because she is not putting weight on her hand as she runs, as the horse must do.  Joggers are commonly taught to flex their elbows and “tuck” their forearms and hands close to their bodies to reduce drag and make running more efficient.  One reason we pay such close attention to the humerus and femur to understand gait is that they are under the closest neurological control and so show us the pattern most clearly.  Runners who try to run without at least letting their humeri swing as shown here generally find they cannot do much more than hobble — because the neural firing pattern is so tight that the femur needs the humerus to move in a trot in order for it to move in a trot;  the two are literally connected by the neural firing pattern.  A person can learn to move only the femur bones to jog, but the firing patterns of the nerves are demonstrably very, very different — and not the “normal” pattern typical of a trot, even in the muscles around the femur.  This is why so much physical therapy is necessary to help people re-learn how to move if they suffer injuries that interfere with the normal firing patterns in any way.)