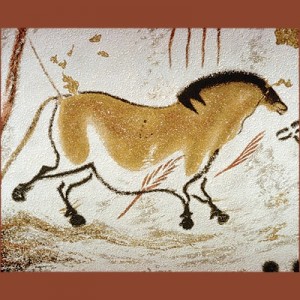 What if some of the fear and anxiety you have when riding comes from fear and anxiety suffered by your grandparents?  Many of the riders I work with state that they don’t know why they are fearful, just that they are.  Recent research suggests that some forms of fear and anxiety may result from experiences our ancestors had that cause them to be anxious or suffer from post-traumatic stress disorder (PTSD).

A recent study at Emory University showed that fear of a certain smell was passed down from male mice to two subsequent generations of mice.  In this study, researchers caused male mice to become fearful to the smell of cherry blossoms by giving mild shocks to their feet when they released the smell into their cages.  Researchers then bred those mice.  When that next generation of mice first smelled cherry blossoms, they became fearful and anxious, even though they had never had any kind of negative experience to that smell.  The effect lasted through one more generation of mice.  According to the Washington Post, researchers found that those mice actually had “more cherry-blossom-detecting neurons in their noses and more brain space devoted to cherry-blossom-smelling.”

While studies on mice may not be easily translatable to humans, there is similar evidence resulting from human studies.  For instance, studies on humans have shown that a generational effect may result from traumatic events, such as children being more likely to suffer from PTSD if their mothers were also PTSD sufferers due to a trauma.

Genetics is a complicated science, so no one is suggesting that a child will definitely be impacted by environmental influences upon a parent, grandparent or other ancestor.  These studies are puzzle pieces that can help us better understand fear, anxiety and PTSD.  They also encourage scientists to delve further into the impact our DNA has on these issues.  Interestingly, a recent study on mindfulness and gene expression shows us a way to address the issue of these studies’ findings and the fear and anxiety some people experience around horses. 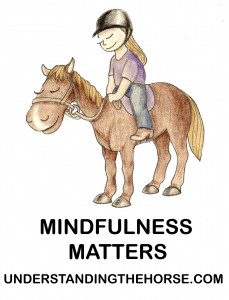 A recent study by researchers in Wisconsin, Spain and France showed the impact that mindfulness may have on gene expression.  After only 8-hours of mindfulness practice, experienced meditators showed reduced levels of pro-inflammatory genes.  The study’s author, Richard J. Davidson, Ph.D. founder of The Center for Investigating Healthy Minds, stated, “To the best of our knowledge, this is the first paper that shows rapid alterations in gene expression within subjects associated with mindfulness meditation practice.”  It appears from this study that mindfulness can actually suppress gene expression in some instances, and more studies are needed to further explore this finding.

Even if we can’t pinpoint where our fear and anxiety arises from, even if it’s from an event that occurred a generation or more before our birth and having nothing to do with horses, being mindful appears to be a way to help with the fear and anxiety that we are experiencing now.  I, for one, am excited to see more studies done to see what impact mindfulness has on calming and centering us and helping us to enjoy our horses, and indeed our entire lives, more.